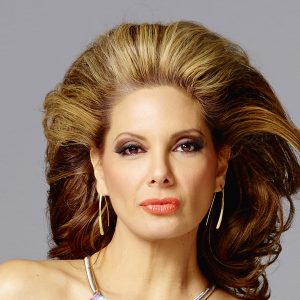 BEST OF LUCK TO ALEX MENESES AT THE 2016 IMAGEN AWARDS! Alex is nominated for “Best Supporting Actress – Television”!

Alexandra “Alex” Meneses is a Chicago native, from a Southside neighborhood – graduating from Mother McAuley High School – and has been a working actress since the mid-1990s. Her first major role was as Teresa Morales in “Dr. Quinn, Medicine Woman,” and she had a recurring role as Brad Garrett’s girlfriend in “Everybody Loves Raymond.” She had film roles in “Selena,” “The Flintstones in Viva Rock Vegas” and “Auto Focus.” In 2016, she joined the cast of “Telenovela” – as Isabela Santamaria – and is nominated at the Imagen Awards for Best Supporting Actress in her role for that show.

Last month, HollywoodChicago.com talked to Alex Meneses via phone from Los Angeles, in a comprehensive overview of her adventurous career.

HollywoodChicago.com: Since you are nominated for an Imagen Award, how important is it for you that Latin voices are represented in entertainment?

Alex Meneses: It’s hugely important, because the Latin voice needs to be heard. When I started working, there weren’t many roles for Latinos, and what was there was negative – like drug dealers. But now, for example, look at the part I was nominated for. Isabela Santamaria is an older, sexy, strong and defiant woman. I was thrilled with the part, I loved working with Eva [Longoria]. And it was on an old school network, NBC.

HollywoodChicago.com: What do thing was the quality you brought to the audition for Isabela, that got you the role?

Meneses: I think it was sincerity. Her character has a big persona, but she comes from a real place. Everything has to be played in reality, even as we portray it a bit larger than life. She is real to me, I know that character. I know the frustrations she’s going through. She took a different path than mine, and inside my head she didn’t have much of a life beyond the need for Hollywood attention. My life is full, and I love it. Acting is the frosting on the cake for me. When she gets the show business disappointments, she takes it a lot harder.

HollywoodChicago.com: Obviously, you’ve observed behavior like Isabela’s through your career. Can you name any of those traits that you directly put into the character, based on those observations?

Meneses: Delusion. [laughs] That is probably the number one thing, when I deal with folks I know casually, that are either famous or were famous. To be a big star, you have to be a little delusional. Nothing else matters than being that star. It’s a bit weird.

HollywoodChicago.com: You’re working on a new pilot right now, ‘Unorganized Crime.’ What is the premise, who are the co-stars and what character do you play?

Meneses: ‘Unorganized Crime’ has to do with the mafia, and it stars Chazz Palminteri, Lainie Kazan and Carmine Caridi. Chazz loves theater, and it started as a play, co-written in Los Angeles with Kenny D’Aquila. It was on stage in L.A. and Off Broadway for a couple years, and it’s a dark comedy about the mafia. It’s twisted and funny, basically because the mafia isn’t like ‘the mafia’ of old anymore. Chazz portrays Sal, Kenny D’Aquila portrays Gino, and I am Gino’s wife Rosie.

HollywoodChicago.com: What was different about this character than any other you’ve portrayed?

Meneses: Even though it’s comedy, Rosie takes her life very seriously, and she feels entitled. She comes from the Bronx, but I concentrated on her objective, and where she is coming from – Rosie is tougher that her husband Gino, who has a distaste for killing. Rosie doesn’t have that problem.

They’ve been doing the play for two years, and they gave me the part four days before they started filming, with no audition. Chazz rehearsed with me, which was very helpful, and he brought me to a new level as an actor At my time in the business, and at this stage in the game, I’ve come to a new level. That was very fulfilling.

HollywoodChicago.com: Getting to your roots in Chicago. What in your old neighborhood do you consider a hidden gem of the city, that most people don’t know about?

Meneses: My Dad is Mexican, my Mom is Ukranian, and our neighborhood was next to where my mother grew up, the ‘Back of the Yards.’ I don’t even know if my old neighborhood has a name, but it’s like Bridgeport in a way – a mix of German, Irish and Ukranian, with immigrant parents. We didn’t have a lot of money, but I never realized it. I had a great childhood.

HollywoodChicago.com: What Chicago or Midwest value do you think allows you to navigate the rigors of show business?

Meneses: Good work ethic, I got that from my father, he was the hardest working man I even knew, without complaint. That inspiration is a blessing. Also, just being kind of normal. I find that Midwestern people are a bit more normal. It helps me look at certain things and think, ‘not going to do that or be that way.’

HollywoodChicago.com: What do you think the best decision of your career was, regarding why you had to make it and what resulted from it?

Meneses: It was about bringing integrity to everything I would do, no matter how small or large the part was. With every audition, I would bring that integrity, so if I didn’t get the part it didn’t matter to me, because I did the best job I could possibly do. I always walked away feeling like I accomplished something real, no matter what.

HollywoodChicago.com: So making the decision to do auditions like that is when the door broke open?

Meneses: I don’t know when the door broke open, ‘Welcome to Hollywood.’ I have no idea, because I had some nice breaks and worked for awhile, and then didn’t work for awhile. It’s always been a roller coaster. When I got married 11 years ago, I sort of semi-retired, so now I’ve come back to work and have the most success I’ve ever had. It crazy, I love it and it’s a beautiful thing. I feel like I’m always hopeful.

HollywoodChicago.com: You began your career before the dawn of the internet. How do you feel about people’s ability to download everything in your career now, including some early stuff you did for Playboy?

Meneses: Unfortunately, it comes with the territory. I accept it as part of what happened, otherwise I’d go out of my mind. There are folks who go on my Instagram and Twitter pages and say terrible things. Why? However, I can’t control it. It’s strange and annoying, but I also use the technology to get myself out there.

HollywoodChicago.com: Through your observation, has sexism in the entertainment industry gotten less prevalent in the business since you started out, or has it remained the same or gotten worse?

Meneses: It’s gotten less prevalent, and ‘Telenovela’ is a great example of that. Eva Longoria was the creator, executive producer and star of the show. There were women show runners and producers on the show. It was both a woman’s production and Latino show, and that would have never happened 20 years ago. The whole business is evolving upward, and we also have to think that it is the case, because what you put out there comes back to you.

HollywoodChicago.com: Regardless of politics, what do you think of the first woman candidate for president, and do you think that helps as a role model for women going forward?

Meneses: I happen to think that Hillary is a beacon of hope for younger girls, as was Barack Obama in other inspirational areas. We’ve now had an African American president, possibly a woman president, it’s pretty cool. As far as she is concerned, whether man or woman, she is capable and experienced to be president. I’m voting for her because of that experience.

HollywoodChicago.com: Since you worked on some classic 1990s dramas and sitcoms, what do you find different about the business and distribution issues regarding television today?

Meneses: Frankly, I stay out of that. [laughs] I just put my head down and do my job. I will say – and like you said it’s because I did a lot of shows in the ‘90s – that ‘Telenovela’ had lessons in social media. NBC gave us social media classes…Instagram class, Twitter class…it’s part of the job now. That’s different, and a little weird.

HollywoodChicago.com: What type of role would you like to do before your career is over, and what do you think casting directors don’t consider you for, despite you wanting to do a particular role?

Meneses: I don’t know, I’ve played every level – sweet and innocent, a diva, a psycho killer. I’m not sure what casting directors think of me or don’t think of me. I’d like to play a vampire, I haven’t portrayed a vampire yet. I want cool vampire clothes. [laughs] My daughter just said I can’t play a vampire, because I’m a girl.

HollywoodChicago.com: You are involved with your high school alma mater, Mother McAuley, here in Chicago. What sense of pride do you get from that all-girls high school and how it has evolved since you graduated?

Meneses: It’s huge! They built a new gym, I couldn’t believe it. It was like a stadium. And the girls playing volleyball scared the heck out of me. When we played volleyball we had our cute little shorts, but these girls are wearing the skin tight super duper shorts, and they are athletically strong. They are super kids. It’s amazing, because the school has grown physically and technologically, but there still is that McAuley sweetness. There was a wholesomeness to going to that school, and I still see it. I’m an advocate of single gender education.

HollywoodChicago.com: What was the point in your career where you turned around wherever you were at, and thought, ‘how the hell did I get here’?

Meneses: I think its when I did ‘Everybody Loves Raymond.’ They brought me to Italy for two weeks, and I was treated in a way that I had never been treated before – it was like being a movie star. Everyone there was so nice, so giving and so grateful to have me on the show. Here I was sitting in Rome, in my five star paid-for hotel, with croissants and whatever else I had from room service, and I literally thought, ‘how did I get here?’ 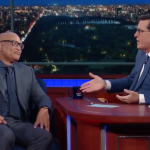 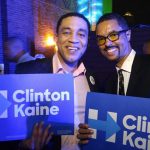