Be they newspapers or relationships, BoJack Horseman has a lot of issues
Hello again, Character Actress Margo Martindale!
By Les Chappell for The A.V. Club, 08/08/2016 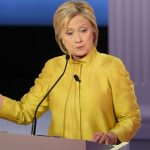