With the new President in charge, the sky hasn’t fallen … yet 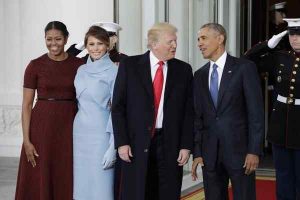 So far, so good. Day 3. Donald J. Trump has been president for more than 48 hours, and we’re still here.

The apocalypse has not happened.

A few other things didn’t happen.

Barack Obama didn’t take away my guns. On Friday, Obama climbed aboard a Marine helicopter and flew into retirement without instituting Sharia law. Nobody forced me at sword point to convert to Islam. Amazingly, the Stars and Stripes still fly over the White House rather than the hammer and sickle, as we were told.

While former President Obama championed many laws and policies I emphatically disagreed with, he left office without declaring martial law or rounding up his political opponents and packing them off to FEMA re-education camps. The Constitution — bloodied and battered as it might be — is still recognized as the law of the land. After eight years of Barack Hussein Obama as president, the Land of the Free is still free. You would not think that possible based on the anti-Obama hysteria we have just lived through.

Americans are a notoriously optimistic bunch.

Blessed with a temperate climate, a two-ocean coastline and nearly limitless natural resources, we created a form of government that has allowed not just a new nation to flourish but a new breed of man: the American. Positive. Creative. Forward looking.

This spirit of optimism is one of the distinguishing characteristics that separate us from citizens of most other countries. While we have experienced our share of tragedies, both natural and self-inflicted, we have not had to endure the centuries of suffering that cast a seemingly permanent dark cloud over our national spirit. Study the history of Poland, Russia or nearly every nation in the Mid-East, Africa and much of Asia. Catastrophe and chaos appear with appalling frequency. My people, the Irish, sip from a tall glass of fatalism despite all that charming blarney.

So maybe all our good luck explains another uniquely American characteristic, our susceptibility to fits of hysteria about our leaders.

Since George Washington took the first oath of office 228 years ago, a goodly portion of the population manages to convince themselves whoever is president is up to no good.

Historians have documented countless bizarre and laughable conspiracy theories about Thomas Jefferson, Abraham Lincoln, both Roosevelts, JFK, Reagan, and literally every president, including benign nonentities like Millard Fillmore, Chester A. Arthur and Benjamin Harrison, all of whom were believed by some to be part of an evil cabal determined to subvert democracy and usher in a despotic reign of terror. Simple differences of opinion often get spun by hyperpartisans into wild, apocalyptic plots to subvert the very underpinnings of civilization.

Obama rode into office on a wave of nearly universal goodwill. With the exception of a smattering of racists and hard-line ideologues, the overwhelming majority of Americans wished him well as evidenced by the 2 million who traveled to Washington to witness his first inaugural, the largest crowd ever gathered for anything in U.S. history.

Over the course of his two terms, Obama made enemies. Every president does. Because of his unusual upbringing, conspiracies theories flourished: Born in Kenya! A Muslim! A communist! For some, Obama wasn’t just wrong, he was Satan.

Donald Trump took office Friday with very little goodwill to welcome him. Much of this is his own doing. Trump’s unique personality doesn’t generate sympathy. Combative by nature, his in-your-face attitude repels more than it attracts.

Still, the over-the-top fearmongering of Trump’s critics is likely to look as ridiculous to future generations as the crazy wing-nut conspiracies aimed at Obama … or Warren Harding or Dwight Eisenhower or even little Jimmy Madison and the 40 others who have served as our commander in chief.

Trump will make mistakes. Maybe lots of them. But the sky hasn’t fallen.

Doug McIntyre’s column appears Sundays. Hear him weekdays at 5-10 a.m. at KABC AM (790). He can be reached at: Doug@DougMcIntyre.com. 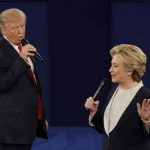