Wise assessment from our guy Doug McIntyre on The Daily Beast. Angelinos can hear him every morning on KABC Radio’s McIntyre in the Morning and read his Sunday op eds in Los Angeles Daily News. 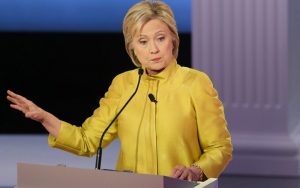 Hillary, Don’t Debate With an Audience
It’s how Trump’s reign of terror all began—with Fox News’s built-in laugh track.
By Doug McIntyre for The Daily Beast, 08/05/2016

Hillary, Don’t Debate With an Audience
It’s how Trump’s reign of terror all began—with Fox News’s built-in laugh track.
The Trump stories just keep coming; too fast for newspapers, too fast for television, too fast even for The Daily Beast.
Covering Trump is like the much-loved episode of Lucy at the candy factory, stuffing caramels in her mouth trying keep up with that ever-accelerating conveyor belt. Trump travels at the speed of Twitter. Before you can hit “send,” whatever outrage you’ve written about is as fresh as the Lindbergh baby kidnapping.

So it might be asking too much to have you return with me to Aug. 6, 2015, a whole year ago, the very first night Donald J. Trump appeared on a debate stage as a candidate for president of the United States—the night America jumped the shark.

It wasn’t the red hats with the simple slogan. It wasn’t his wealth or even his reality-TV celebrity status that propelled him to the GOP nomination. It was the laughter and cheers of a few hundred people in a theater in Cleveland that made it possible for Trump to be one election away from the White House.

By staging that first GOP debate in front of a live audience to hoot and holler at each “Low-Energy Jeb,” “Little Marco,” Carly “Look at that face” Fiorina, and “Lyin’ Ted,” Fox News handed the bully his pulpit. Had that first debate been conducted in an empty TV studio like 1960’s Kennedy-Nixon telecast, Trump’s boorishness would have fallen as flat as your drunken brother-in-law’s “funny” wedding toast.

In a vacuum, Trump’s insipid name-calling and convoluted answers to policy questions would have ended his candidacy before the first commercial break. By providing Trump with a laugh track, Fox News gave America permission to cheer him on. CNN, CBS, ABC, and everyone else followed suit and Trump rode his “Andrew Dice Clay Goes to Washington” act all the way to the GOP nomination.

In fairness, after decades of scripted jibber-jabber from just about everyone, politicians, corporations, media, even religious leaders, millions of Americans find Trump’s bluntness refreshing.

$400 million in Swiss francs and euros shrink-wrapped on pallets and flown to Tehran on the same day four detained Americans are released?

“Just a coincidence” says the president.

Trump says he’s not politically correct and he’s not. He’s also not factually correct. But Trump’s lack of knowledge about just about anything won’t dissuade his supporters. Like our cousins across the pond, millions of Americans have begged their government for years for relief from the catastrophic consequences of globalization that wiped out entire categories of work, as well as the tsunami of workers (both legal and illegal) that devalued the labor left behind. The so-called responsible politicians told these Americans to shut up, they knew better, and anyone who objected was dismissed as a provincial, a xenophobe, a racist.

Now we have one.

Trump (and to a great extent, Bernie Sanders) was created by the willful indifference of America’s political/media complex to the plight of all those Americans who never saw Reagan’s “shining city on a hill” and have yet to experience the upside of Obama’s “hope and change.” But like every other institution in the post-Napster era, the two major political parties no longer have a monopoly on the message.

Look at what just happened: A 74-year-old socialist from a tiny state famous for its maple syrup and heroin epidemic nearly knocked off the ultimate insider thanks to millions of disaffected liberals willing to blow $27 tilting at windmills while an orange-tinged, thrice-married narcissist with a hyperactive Twitter account managed to co-opt the evangelical movement while engineering a hostile takeover of the party of Abraham Lincoln, Theodore Roosevelt, and Dwight Eisenhower.

Now the only person standing between America and President Trump is Hillary Clinton.

At Hil’s coronation in Philadelphia, music icon Paul Simon croaked through “Bridge Over Trouble Waters,” because everyone knows the Democrats build bridges while the Republicans only build walls. A better choice of song would have been “The Sound of Silence.” 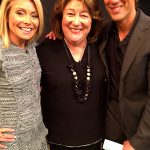 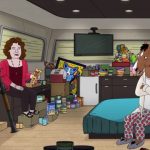