Earlier this summer The Wife made a key lime pie that was so delicious, so gloriously good, I nearly cried when I swallowed the last bite.

I tried to prolong the inevitable end, breaking each forkful into smaller and smaller bits, eventually using my thumb to dab up the crumbs clinging in the folds of the tin pie plate. And then it was gone, leaving behind pleasant memories along with a deep yearning for just one more taste.

Sunday, Oct. 2nd, 2016, is the final day of Vin Scully’s magnificent 67-year career. When the last out is recorded in San Francisco, the Dodgers will head into the playoffs and Vin Scully will head off into baseball immortality, taking his place in the procession of hardball gods: Ruth, Cobb, Gehrig, DiMaggio, Williams, Robinson, Mantle, Mays, Aaron, Scully.

Children yet to be born will speak the name Scully reverentially, inheriting the proper tone and intonation from their parents and grandparents the same way we genuflect to the memory of players we’ve only seen in scratchy black-and-white clips. Vin’s 67 years behind the microphone qualifies for inclusion in the numeric DNA of baseball: 511, 56, 61, .406, 755, 4,256. Yogi said, “You can look it up,” but a real fan already knows.

We’ve exhausted the supply of adjectives the language gives us to describe the countless ways he is the best there’s ever been. My effort today is worse than redundant, it’s self-indulgent. Guilty. I’m writing this for me more than him.

Still, it’s hard to blame me for trying to savor every last sound bite of Scully’s irreplaceable voice. Like The Wife’s key lime pie, what’s wrong with trying to soak in every last crumb Vin Scully has to offer?

There will be baseball in 2017 and beyond. Vin would be the first to tell you the Dodgers will be just fine. Next February, pitchers and catchers will report to Arizona, and by early April the Dodgers will back at Chavez Ravine. Once again it will be “time for Dodgers baseball!”

New heroes will don Dodger Blue. Fans will cheer and boo, and Farmer John will continue to offer a wide variety of delicious meat products.

A few years ago I ran into Scully in a Gelson’s parking lot. He was leaning on the trunk of his car waiting for his beloved Sandy to finish shopping.

I had met Scully before, mostly at KABC Radio back when we carried the Dodger games. I had even recorded promos and a couple of interviews with him. Occasionally I’d see him in the “Vin Scully Press Box” cafeteria at the stadium, so he knew who I was. He even remembered my name. Pinch me. I’ll go to my grave remembering the time Vin Scully said, “Stay up with the Dodgers, wake up with ‘McIntyre in the Morning.’ ”

But I wasn’t the only one to spot Scully in the parking lot at Gelson’s. One by one shoppers saw him and soon the few became many.

Quite a few had also met Scully before. He remembered some of their names as well. But even those meeting Scully for the first time felt they had known him forever, and in a way they had — who in Southern California doesn’t have a relationship with Vin Scully?

But the crowd continued to grow, and Scully found himself in the center of a mob. With characteristic grace he excused himself and retreated to the safety of his car. This is a man who knows how to make an exit.

On Sunday, Vin Scully makes his final exit from the broadcast booth. While we’re forever grateful for all he has given us, selfishly, we’re also sad for all he will take with him. Nobody else is going to tell us about the time they took Jackie Robinson ice-skating in the Catskills. Who else was there in ’56 when Don Larsen threw his perfect game in the World Series? What other announcer will pull off cooing over an adorable baby in the stands like your grandmother? There isn’t a play-by-play man alive who would even think of describing the Dodgers trying to dig out of an 8-run hole as a “Sisyphean task”

In the age of Twitter, do we still have the patience for storytelling? In a culture obsessed with the young, how many of us will hang on every word of a man knocking on 90’s door?

The Wife still has her key lime pie recipe, and someday she’ll make another. Hint, hint. But there is no way to make another Vincent Edward Scully. 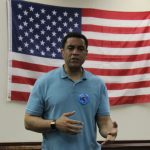 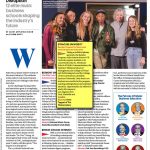